UPDATE July 2011: I'VE STARTED CYCLING AND AM *LOVING* IT!  I PLAN TO KEEP CYCLING AS LONG AS THE WEATHER COOPERATES.

Synchronicity!
My parents visited the Outer Banks of North Carolina and the Town of Duck this past October.  I work for a fire department and my dad thought it would be cool for me to have t-shirts two local North Carolina fire departments were selling as fundraisers.  So it came to be that I have a shirt from the Duck Fire Department and one from the Corolla Fire Department.
Unrelated to my parents trip, it was on October 26, 2010, inspired by nearly 10 whole months of doing something every day (my 365/Creative Every Day project), that I decided I'd had enough of wishing for better fitness and started walking.  I mostly walk indoors using Leslie Sansone's program.  I often grab one of the t-shirts my dad brought to me from North Carolina to wear while walking, but I never paid much attention to what I was choosing.

So, tonight, January 8, 2011, I've reached 101 miles.  I've been curious about where in the world I'd be if I were actually walking consecutive outdoor miles.  So, using Google Maps, I discovered I'm standing on the corner of Newark and Fairmount Avenues in Elizabeth, New Jersey.
I thought it might be fun to then see where I'll be at 500 miles.  Again, using Google Maps, I dragged my destination arrow and found a spot called "Duck Pier".  When I searched photos I found it to be a beautiful beach location. 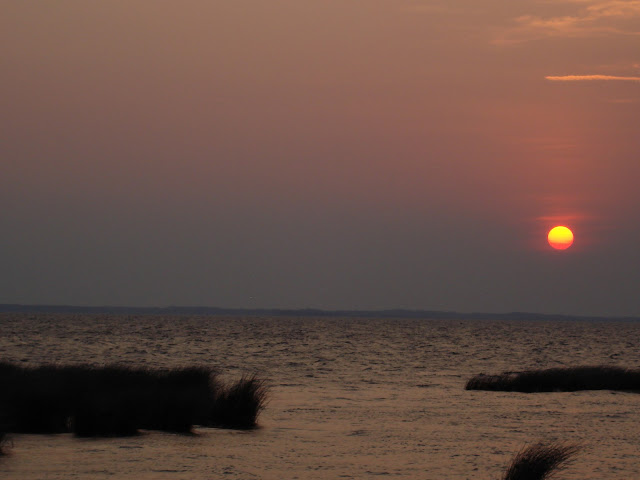 (Photo by rmathus)
Oh I love the beach!
I showed Paul and declared the Pier to be perfect inspiration for my walking.  I searched again to try and find a more exact address so I could add it to my map.  I discovered it is in a town called Duck in North Carolina.  It took a few moments before it dawned on me...DUCK!  That's the town on one of the t-shirts from my dad that I wear while walking!
Isn't that cool?
The Town of Duck does look absolutely dreamy and my mom assures me it is beautiful there in October.
Maybe once I meet my goal of "walking" there I'll actually go someday!
Wouldn't that be amazing?
Kind of kooky, but if it helps keep me motivated to exercise then so be it!

If you'd like to watch my progress, I have a Daily mile mileage counter on here on my blog.
~Aimee