Chop! (aka The DIY Karate Board Photo Gallery Wall) 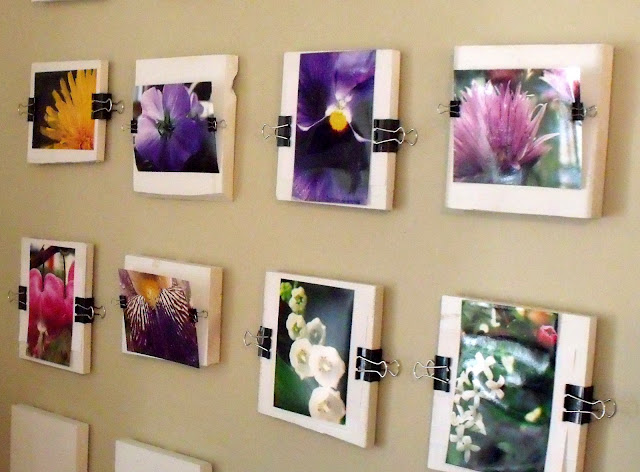 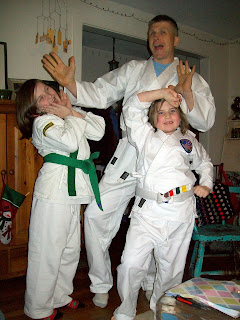 At various times, mostly to advance to the next level, they broke boards - with their hands and feet!  It was totally awesome and empowering. 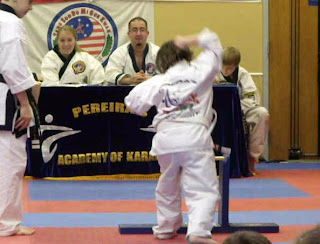 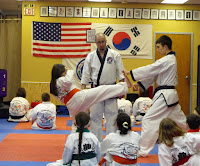 It created a lot of boards.
And, us, being the sentimental fools we are found it difficult to part with even one of them.  Lots and lots of boards.  I kept thinking I'd come up with an idea of how to upcycle them, but gluing them together to make book ends just didn't ever happen.  After several rounds of decluttering this summer and early fall, those boards were marked for destruction.  We all agreed to keep the "first break", but the rest were going to go in the wood stove when we fire that baby up in another week or so.  For weeks, the boards had been in a pile (that continuously fell over much to my agitation) in front of the wood stove awaiting incineration.

And then I saw this:
Easy Photo Wall on a Shoestring Budget
and this:
Design Sponge Best Gallery Walls
and others which I cannot now for the life of me find to share
and my mind's wheels starting whirring.

Paul had already indicated he would like to see some of my 365 project photos displayed in our home and now I knew I'd be using those karate boards to do it.
First, I spray painted the fronts and sides of the boards, not at all worrying about perfection.  Any drips, chips, splotches just added to their overall character. 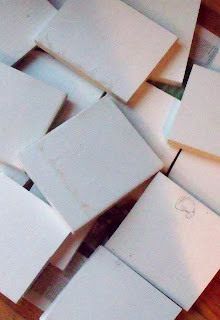 I preserved the markings on the back of the boards indicating when they were broken. 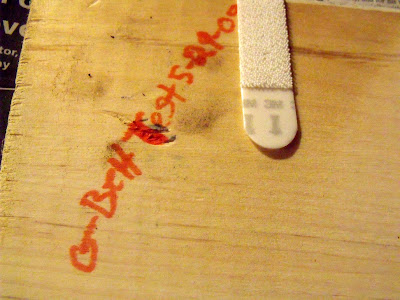 Then, I decided to use the 3M Command adhesive tabs for hanging so I wouldn't have a zillion holes in my newly painted wall.  I tend to move things around quite a bit and wasn't sure how long I would want to remain committed to the photo wall.  What if the whole idea just didn't work and I needed to scrap it?  Better to not have all those holes in the wall.  Plus, the boards are preserved this way too. 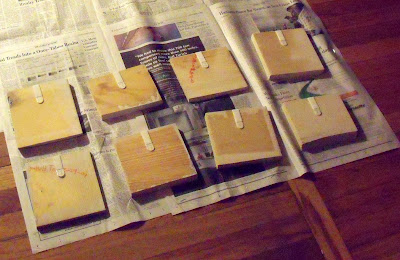 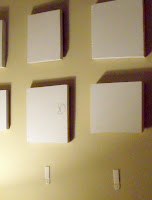 He made the marks and I stuck them all up on the wall.  Thanks, Paul! 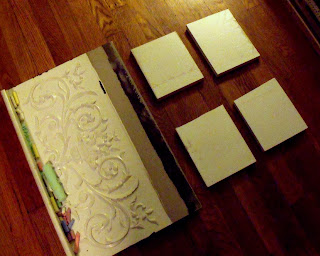 This is the layout for the other side of the corner.  It incorporates the "chalk tray" which used to hold music on our old piano.  The chalkboard wall in the dining room is on the other side of this wall, so it is a great spot to store the chalk and highlight this cool piece of "found vintage".

So, finally, the wall was up.  It was this awesome blank canvas. 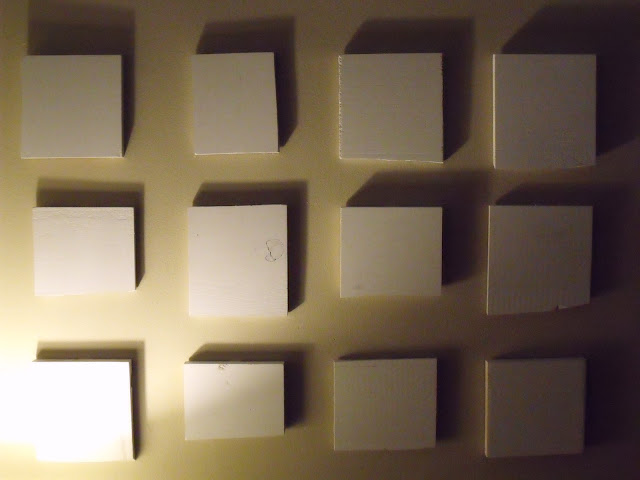 It is a real work of art all on its own.  We were enjoying it so much blank that we contemplated leaving it that way. 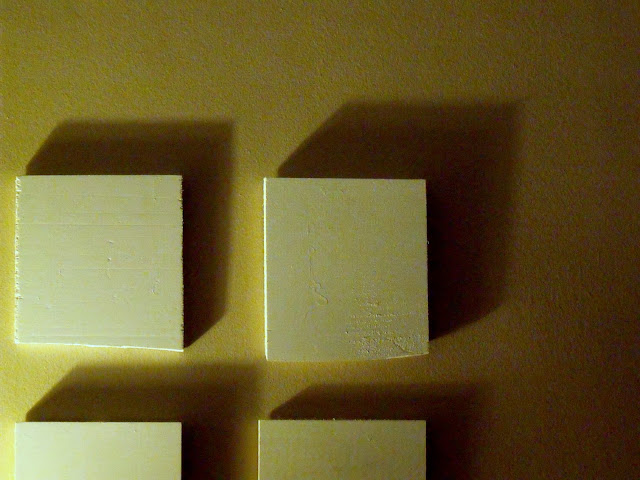 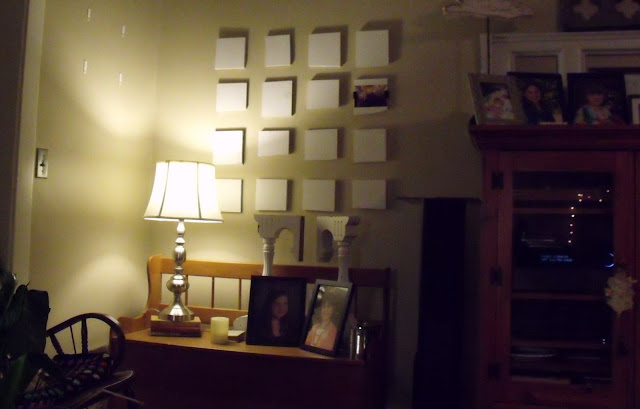 Here it is partially done.  I put up a photo just to see how it was going to look and the family decided we all liked it better blank.  Sigh. 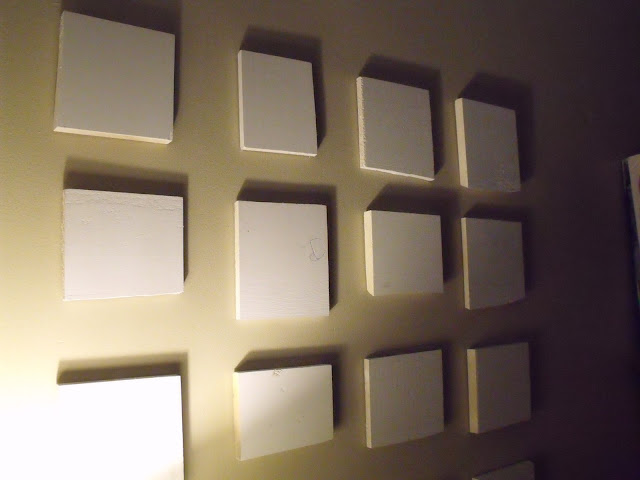 I was way too crabbed out from creating the thing and now was trying to acclimate to the idea that the PHOTO wall would not have any PHOTOS.  I generally don't change gears quickly or gracefully.  I hadn't even yet solved the problem of how to attach the photos so they could be changed out from time to time (thereby ditching spray adhesive or modge podge which were other ideas at one point).  I did not want to permanently adhere them to the karate boards.  So, part of my brain was still percolating a solution to that problem and the other part of my brain was trying to detach from the idea of my photo wall actually holding photos.
I was not a happy camper. 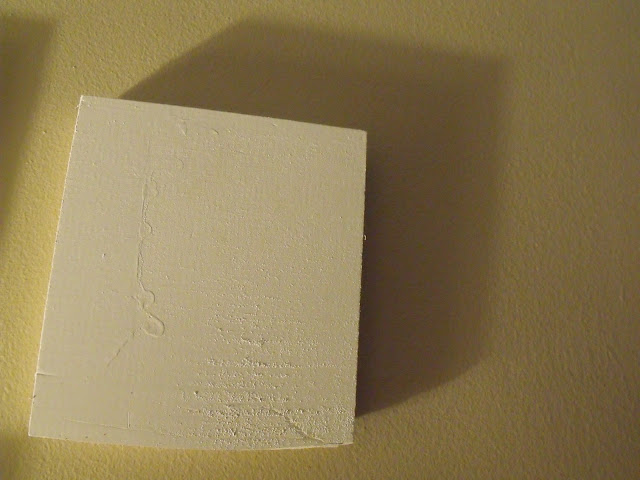 I needed some time and space from the project.  So for most of the week it just stayed blank and looking awesome while I worked out some gunk and waited for some more inspiration.  I found it a bit too modern looking for our "vintage, shabby, sentimental, cottage meets coastal cabin in the woods" style living room.  I checked in with the family for their input and while they did like it blank, they also loved the idea of the photos.
I had decided, after searching for other items and tossing other ideas, to use plain old binder clips to attach the photos.  It took me a couple of days to secure the right sized clips a la Goldilocks (small ones were too small, the big ones were too big, and the medium ones were almost just right).   As it stands now, I'm using a combination of small and medium clips.  This may change if I come up with a better plan.

(Note: Deciding to permanently attach the photos would have made it much easier.  I would have just used spray adhesive or modge podge.  I think that would be a great idea for folks with kids in karate...adhere a photo of the child breaking the board onto the board and hang it on the wall!  Awesome idea, right?)


Choosing photos is another huge endeavor, so for the time being, I am using a set of flower photos I had already printed and keep on hand to use for handmade note cards that I sometimes give as gifts.  At first it just felt way too weird for me to display any of my photos.  I was feeling uncomfortable and was tuned into the mind chatter channel which plays re-runs of  the old classics "Its not good enough" and "Who Do I Think I Am, an Artist?!"
I'm grateful for Paul and the girls encouragement and enthusiasm in this.

After all that, here's the wall: 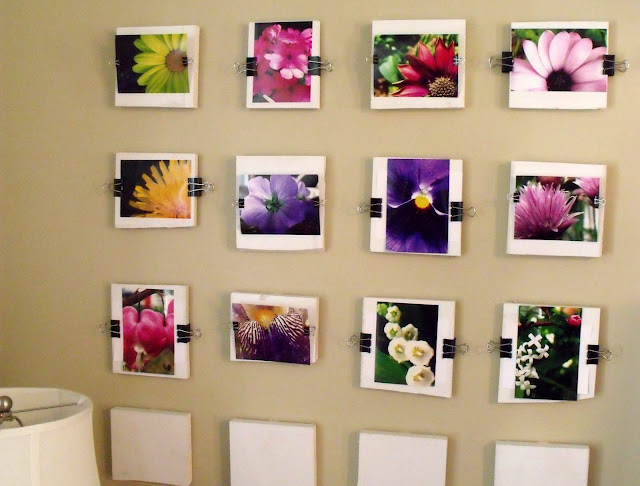 I am now looking forward to adding more photos and periodically changing them out for others. 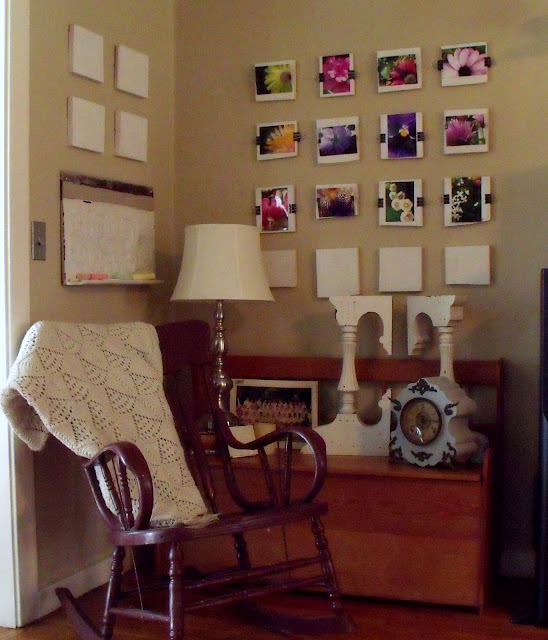 With the photos up, it fits into our funky space so much better. 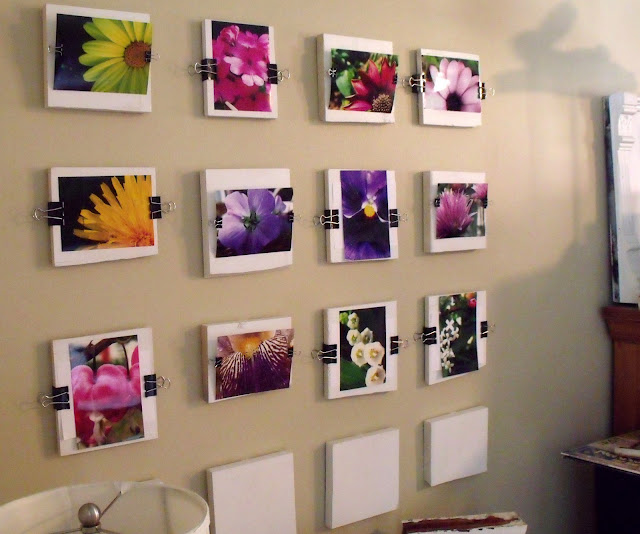 I'm really loving it!  What do you think?

Linking to:
Metamorphosis Monday at Between Naps on the Porch
Making Monday Marvelous at C.R.A.F.T.